For the last year of using an unofficial Messenger Mac client Caprine that has an unofficial dark mode I just couldn't understand why the official iOS Messenger app doesn't have dark mode for years. But now it's there. Sort of.

Overall I wonder how this have been found in the first place, but it works:

Can't wait to have it in more apps and hopefully system wide in iOS 13 this summer-autumn. But for now it's the best I can have for an app I probably use the most often among others.

I was scrolling my timeline in Facebook's iOS app the other day when I got this bizarre ad: 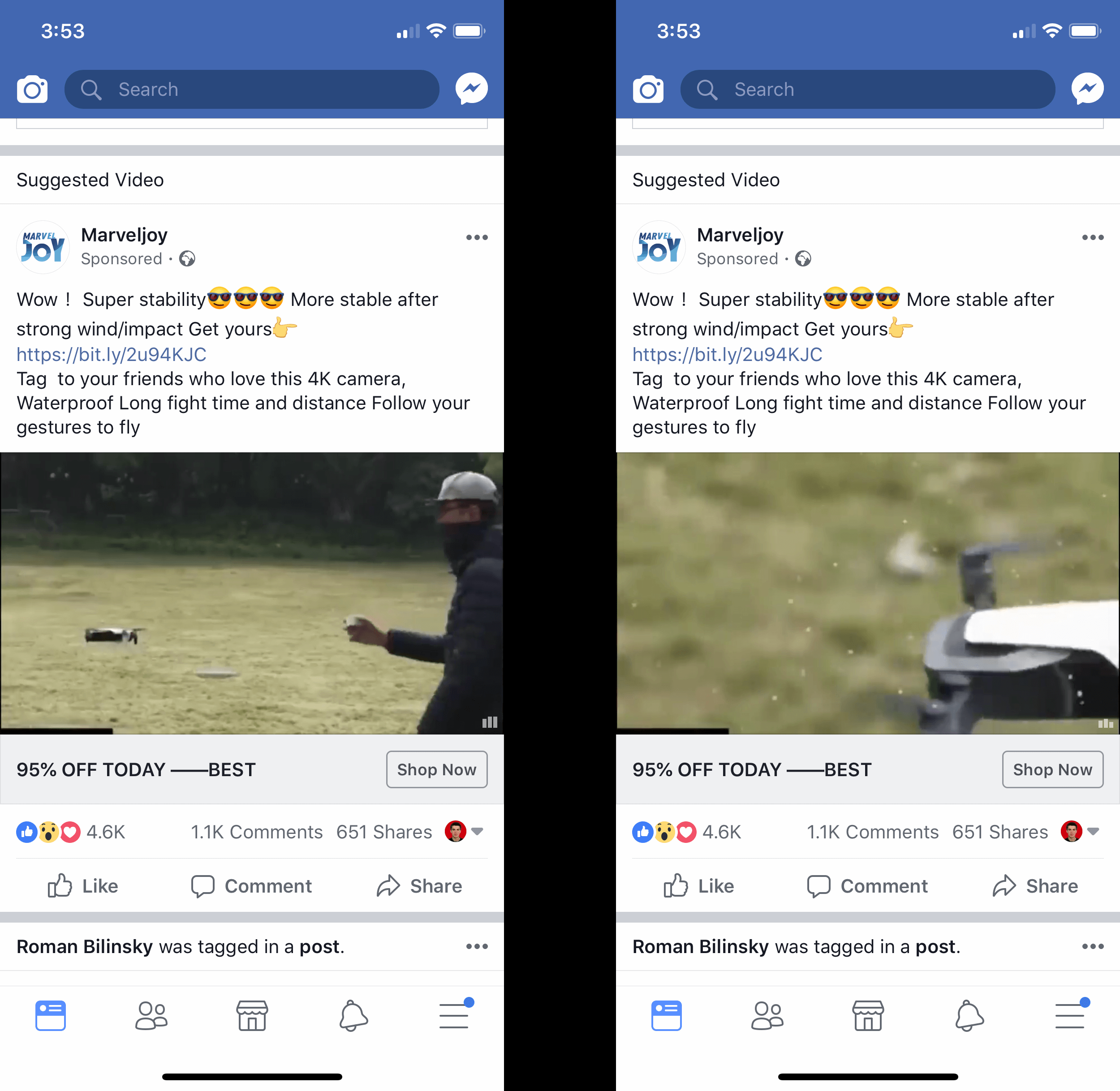 As a drone owner myself I actually recognized my DJI Mavic Air in the video. And what got my attention was the episode where some guy threw a water balloon at the drone. That's where I first thought it's an ad for some sort of water protection glue or skin which allows you to make your drone resist water since most of them are afraid of it.

I naturally clicked the ad since it resonated well with me (praise Facebook's targeting!) and the idea I can preserve my drone from water damage. But when the ad's landing page finished loading I saw they are not selling any protection but the drone itself! The images again displayed the Mavic Air with the initial price of twice as much as you would pay for a new one and a discount of 95% of that price or about 88% discount of the Air's real price! And of course at the end of the page you would find a countdown urging you to purchase.

Facebook claims they are reviewing each ad. But in the next few days I was getting all sorts of gadget ads displayed in my timeline and every time with a huge discount. And each of the ads had tons of commends with the word 'scam' in them. So the reach of those ads was big and such ad should have gotten even more Facebook's attention but it didn't. I assume the clicks pay off nicely for both the social network ad revenue and for the scammer as well. 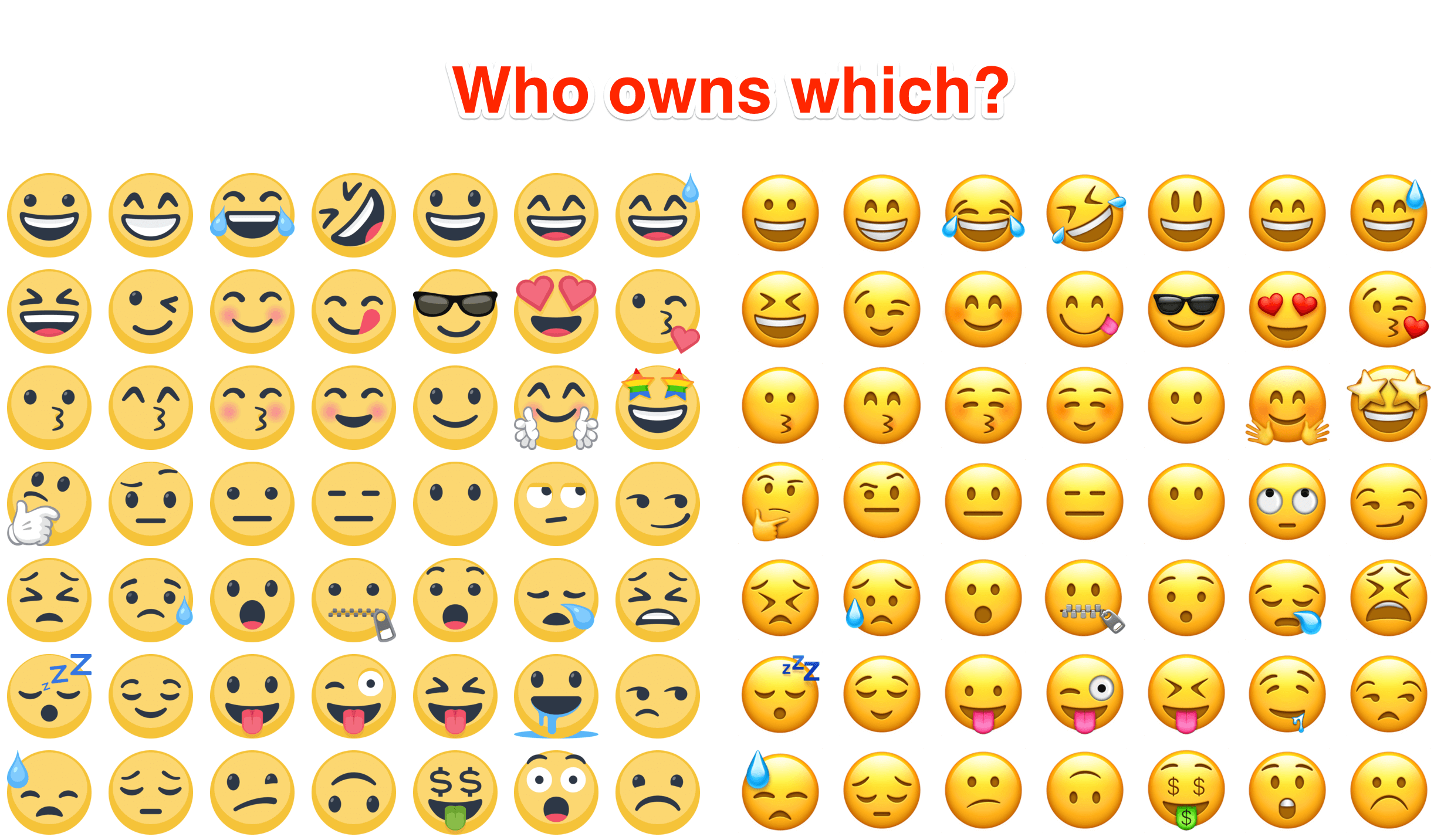 When it comes to locking in users to your product or service companies tend to use all available differentiators. A while ago I mentioned Google's recent transition from their blob emojis which many call a mistake and ask at least to let the users decide which emojis to use. Which obviously would never happen 😀

As for deciding for the users, emoji-wise another thing happened this week as well, now with Facebook. They had their emojis for a while now, but with the option to dig deep into settings in order for you to switch to your beloved emojis which were coming with your device. But now Facebook flipped the switch and at least on the main website/app you will see smiley faces redesigned by them. Messenger still behaves like before, but I don't think that's for long.

It may sound minor - who cares which emojis are on facebook.com but keep in mind Facebook is used regularly by 2.2 billion users, it's Messenger has 1.3 billion, Instagram (owned by FB) recently also hit its first billion, which in total have almost as many users as Apple and Google combined. With that userbase Facebook puts it's leg onto the emoji scene to be recognized as the primary emoji provider in the world. And when they flip switches in Instagram, Messenger and not less important WhatsApp, people will get mad, but they won't have to go elsewhere - Facebook is that big. And forcing everyone use their emojis and eventually getting used to them will unconsciously lock people into Facebook's platform and will make people dissatisfied with other social networks that don't use familiar smilies they see everyday browsing Facebook's news feed or chatting in Messenger. Like with iMessage where people are actually ashamed being 'the one with the green bubble', Facebook creates a mental barrier for people to dislike other means of conversations (messengers, social networks) where you won't have access to the 'norm' thoughtfully declared by Facebook. And being 'main' and 'primary' allows them to reach new all-time high stock prices despite the privacy controversies. So it's just a bit more than emojis 😉